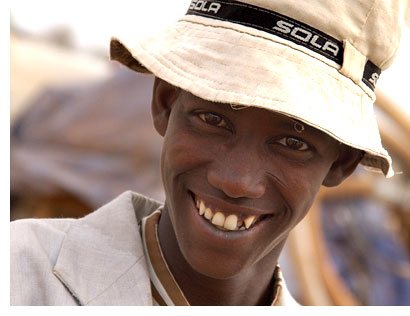 In July 2009, the EWI team traveled to Nigeria, where we saw 182 participants over the course of three Encountering the World of Islam (EWI) seminars. The first seminar was composed primarily of pastors, denominational leaders, and mission directors. The second was a group of Nigerians preparing to go cross-culturally as missionaries. The third consisted of 50 nationals currently working with Muslims.

The first audience had the most difficulty believing that they could befriend Muslims. At the end of our second day, one of the bishops became rather vocal about his objections to the whole training. We prayed a lot that night. The next morning, the Spirit of Christ broke through the resistance in the room. By the end, that same bishop gave a passionate testimony of repentance, declaring the incredible change in his heart toward Muslims due to the seminar.

To our surprise, the biggest controversy in all three classes concerned the false teaching in many Nigerian churches that Christians may not accept gifts from or eat meals with Muslims! This only serves to perpetuate the very hate that Christ came to demolish (Eph 2:11-22). The teaching is based more on fear than anything else, but it grows from a poor understanding of the Scripture about eating meat sacrificed to idols (1 Cor. 8:1-13) and the very false assumption that Muslims worship idols since they call God by the Arabic term Allah. Arabic speaking Christians have always referred to God as Allah, which is closely related to the Aramic word Jesus himself used, Elah.

The group preparing to go as missionaries added to the issue of idol meat. They asked, “How do I respect my church leaders and live among Muslims?” They were so animated, we had to insistute the rule that everyone remain quiet; only the person with “the talking stick” (a water bottle) could speak at one time. Their fervor impressed us, as issues and questions about ministry to Muslims mattered more to them than decorum.

One of the attendees is a surgeon from the Kanuri Muslim people group of Nigeria, Niger, and Chad. He and his Wycliffe mentor are developing 50 biblical dramas for radio broadcast in his language. As a new believer himself, he was forced by Christians to separate from his Muslim community. He had only planned to come for one hour and then leave, because for years he had been so discouraged by the negative attitude toward his people that he repeatedly experienced in Christian mission trainings about how to evangelize Muslims. After staying the entire first day, he cleared his schedule for the next two days so he could attend the rest of the seminar. When we ended, he proclaimed that the training had changed his life!

As sucessful as the trip to Nigeria was, the work that remains is daunting. Given the strong combination of ignorance and hunger we encountered in these first seminars, our Nigerian partner has asked us to return for two or three more timesof teaching in the next 18 months. We’re excited that God is clearly moving but unsure how much the EWI team can take on. As EWI grows, we already have projects in Russian and Indonesian as well.

Encountering the World of Islam

Image: One of our three pilot groups of EWI students in Nigeria.