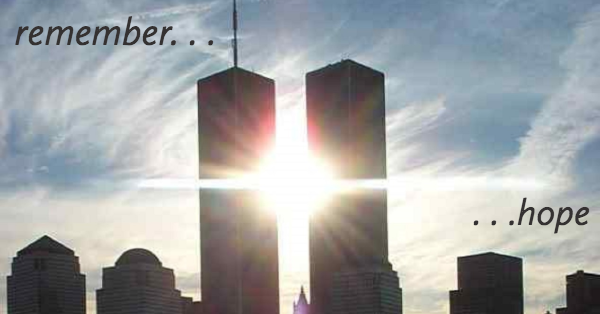 I began hearing the news, sitting at my home office desk in Hilversum, Netherlands. Maybe you remember where you were when so much changed for the U.S. and beyond.

Yesterday we commemorated the 18th anniversary of the tragedy. Again we mourned both the ending of life and the beginning of 18 years of war. I watched this news compilation, reliving the staggering amazement and horror.

If you have suffered as a result of 9/11, if you lost someone on that day or since, as the ripples of this evil expanded through the years, I’m sorry. I don’t know nor understand your suffering, but I pray for you. I pray for us. May God lead us forward to hope and peace.

In what may be a small, preliminary, spark of an answer to that prayer, a group of evangelical Christians has been meeting with leaders in Saudi Arabia this week, including Mohammed bin Salman, Crown Prince of the country.

According to leader Joel Rosenberg, “The group discussed the Kingdom’s sweeping reforms and encouraging battles against terrorism and violent extremism. The group also discussed. . .matters of religious freedom, human rights, Iran, Israel and the peace process.”

Rosenberg pre-empted critics, adding, “While it may surprise some that we would choose the week of September 11 to visit the Kingdom, we actually feel there is no more appropriate time to focus on where the Kingdom must go, can go, and where we believe it is going.”

I don’t know Rosenberg nor his full agenda. But I think we all want God’s kingdom to come to the Kingdom of Saudi Arabia, so I’m happy for efforts like this and pray for their success.

To paraphrase Churchill, it’s better to talk than shoot.

Thank you to the many people who generously responded to my giving campaign over the past three weeks. Together you all donated nearly $2000 to keep Muslim Connect moving forward and to support the work God has given me to help Christians love Muslims and Muslims love Jesus.