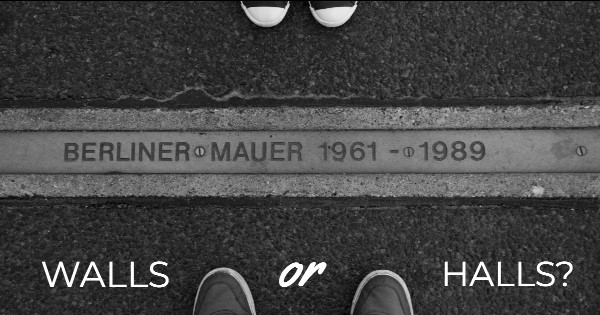 Thirty years ago, I was just out of college, a budding missions’ advocate and a dead ringer for Paul’s concerned image of the Jews, “. . .they have zeal but lack knowledge"! It was about this time in that year, 1989, that the Berlin Wall began to come down.

I remember video of what may have been the most unrestrained joy I’d ever seen. It was intoxicating. People long held captive now found themselves free in ways they’d only dreamed.

This thirty-year anniversary makes me consider walls in my own life and experience. My country is building a literal wall to keep migrants out. This is a physical image of legal walls we’re also building. Then looking inside, I wonder what sort of walls I have toward others, toward God.

Jesus was big on this: “Don’t worry so much about Rome - worry about your own dang heart!” (Loose paraphrase, if you’re wondering!) If you’re near me and are poor, gay, odd, but in a non-charming way, you’ll find walls! And I don’t like that.

I’d prefer my heart, my life, my country to be more like a hall than a wall. A “hall” in the regular “hallway” kind of way: The passage from one good place to another, an opening, a way. Or in the winsome and august British sense of “hall,” like the amazing house called “Great Beefyshire Hall” (or something like that!) that I almost rented some years ago. The sort of hall spacious enough for tons of laughing people to hang out, with a huge, roaring fire and ample food and drink.

Of course life’s never so simple as I prefer. Nuanced arguments are rarely totally lost or completely won. And to be fair, the Berlin Wall was designed to keep people in, not out!

All the same, what’s it going to be in your life? In mine? Walls or halls?