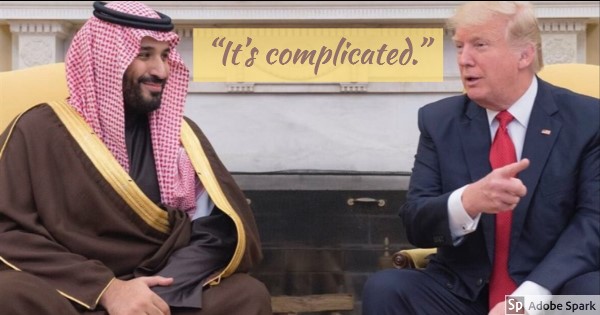 My friend Ali is Saudi Arabian and a great guy. We met when his wife pursued a masters at my alma mater, so I’ve known him a long time. We’re not super close, but we stay in touch.

I can name only two other Saudi Arabians, both celebrites: Muhammad bin Salmon, the crown prince. And, of course, Osama bin Laden. Thirty-three million people and I only know one of them?! Is it any wonder I have a hard time wrapping my head around my country’s relationship with Saudi Arabia? “It’s complicated!” Yeah, pretty much!

An American friend (believe or not, I have more than one of those!) David Weston wrote this past week about that relationship in his More Than Meets the Eye weekly update. I encourage you to subscribe to it.

David says, “Tearing down walls and building bridges is where we can impact this global phenomenon of the movement of peoples. Let’s not put it all on everybody else to try and figure us out. Let’s take the first step and see if we can understand them better. When that happens, respect will begin to grow. When respect happens at an individual level, it will soon be followed by mutual respect at the national level.”

I so want that to be true. I’m going to send a message to my bud Ali today. Join me? If you don’t know any Saudi’s, take a peek at this map to see if there are any clubs near you.

Thank you for reading Muslim Connect. I’m honored and grateful that you do. If you’ve found value in it, can I ask you to consider two things? 1. Share it with a friend. Or a bunch of friends! 2. Ask God if he would lead you to give a year-end financial gift to keep it going. You can do so here. Thank you.