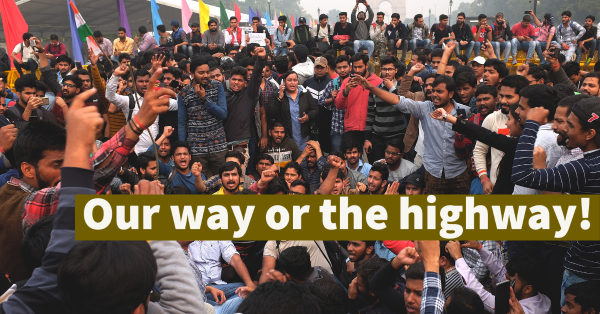 Joy reigned in our house last week when the kiddos got two consecutive snow days! Meanwhile something not joy probably characterized the thousands of Indian students whose schools closed in Karnataka due to controversy surrounding whether or not Muslim students can wear hijabs to class.

As you’d guess, it’s challenging to discern where the controversy began. Each side would like to take the moral high ground and say, “We’re only righteously responding to the problem ‘those guys’ instigated!”

As you might also guess, I’m sympathetic to the Muslim side of this argument. I’ve seen firsthand how Muslims are oppressed and marginalized in India. There’s also the reality that roughly 80% of India is Hindu compared to 15% Muslim. And the BJP (the Hindu nationalist party to which current Prime Minister Modi belongs) has seized this polarizing issue to enflame passions for their party.

I’m so glad we never see anything like this in the U.S. (wink, wink)

So what, if anything, can a thoughtful Christian do, given that most of us are so far away?

You may have better ideas, but here are two things to pray and two to do: