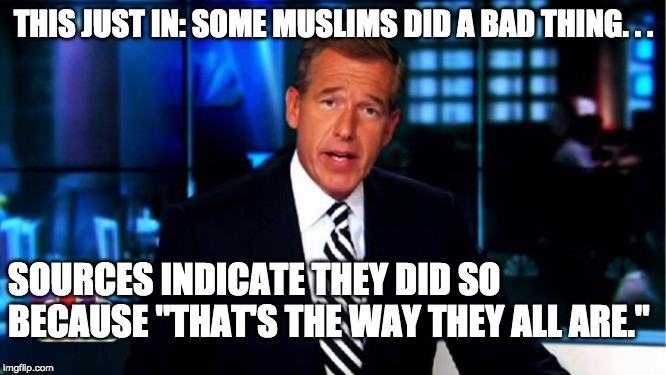 News is news because it’s unusual, spectacular, or scary. It follows that the news we get and remember about Muslims will probably be one or more of those three. Since most of us don’t know a bunch of Muslims (yet!), we’re apt to assume the events making up the news accurately reflect who they are.

And maybe they do. But only for a slice of the Muslim world, not the whole enchilada.

The Muslims making a splash in the headlines and in our psyches today are not a small bit of a single, homogenous whole. They are all Muslims, but they are not “all Muslims.” They are indicative of the whole only in the same way a box of crackers is part of a grocery store. Are crackers groceries? Certainly. But the store also has cheese, bacon, Tic Tacs, and yams.

We’d be wise to get more sophisticated in our understanding and help our buds to as well.

Case in point: The 16 million Malay people of Malaysia. 99.9% of them are Muslim, most are faithful and orthodox, but very few are taking up arms to enforce their chosen style of Islam. Whatever is behind it, culture, ethnicity, living in a winsome and generous land, Malay people show a kinder, gentler face of Islam.

I know from personal experience that they are willing, even fervent, in their desire that others should know the hope they’ve found in their faith. But violence and belligerence are not part of their approach.

You know as well as me, no news anchor is going to look into the camera, brow furrowed and declare, “A Malay family had a nice, relaxed evening yesterday. This follows what appears to have been a tasty and more or less healthy dinner. More after the break.”

Here’s the point: What we hear most about Muslims doesn’t accurately describe most Muslims. The fuller picture, and the nature of Jesus, indicate hopeful engagement, rather than fear and isolation is our best bet. (Tweet this.)

1. Just like Muslims, Christians are two groups.  REAL Christians that actually read the Bible and KNOW that Our ONE God is a God of LOVE.  Similar to Muslims.  The REAL Muslims that the U.S. is not familiar with AND the terrorist that misinterpret the Quran and claim ALLAH tells them to.  Specifically chapters 8 and 9.  J

Just like the bad Christians, they forget that Muhammad was ONLY about LOVE and PEACE.

Unfortunately, the U.S. got familiar with Muslims and Islam through the terrorists that claim it was for their religion.  Can you blame us for that? However, just assuming that all Muslims are alike is close minded and ignorant.