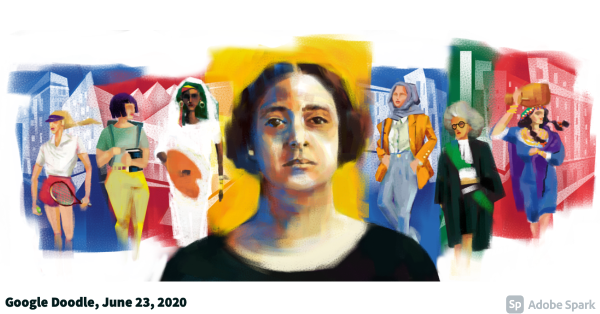 In an act of bold defiance, Huda Sha’arawi stood in front of the Cairo train station and pulled off her veil. . . in 1923! And she encouraged other Muslim women to do the same!

Born into a wealthy Egyptian family in 1873, Huda’s 142nd birthday is next Wednesday. At thirteen years old, she was married against her will. Feisty, even at that age, she insisted on a monogamy clause in her marriage contract. When her husband, forty years her senior, continued to consort with his first wife, Huda walked. Their seven-year separation gave her opportunity to feed her appetite for education while growing an appetite for independence.

Huda began her work by organizing the first secular, female-led philanthropy organization in Egypt. They helped poor women and children with medicine and education.

Bowing to family pressure, she rejoined her husband in 1900. Together they spent two decades advocating for Britain to leave Egypt. Shortly after winning independence, he died and Huda began to focus on women’s rights.

She established the Egyptian Feminist Union in 1923. Serving as its president until her death from cholera in 1947, Huda advocated for women’s suffrage, a minimum marriage age of 16, and education for women and girls.

She and her colleagues made solid strides for women, but much of their progress has been rolled back in recent decades.

It often helps to be born into prosperity (like most of the Muslim Connect tribe, if we’re honest).

Too few Muslim women today enjoy the freedom Huda worked for. Many, perhaps most, live in oppressed domestic, political, and spiritual situations.

At the same time, I welcome the helpful reminder that Muslims are not “all poor and powerless.” There are Sha’arawi-esque rock stars in the mix!

Read more about Huda at insidearabia.com and wikipedia.org. Watch a short and sweet BBC video. There’s even a pretty fun rock song about her!