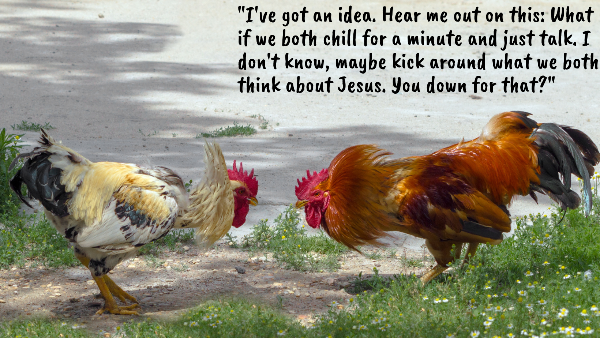 Do you ever get this feeling like I do that Joe Christian and Malik Muslim tend to initially approach each other like a couple of roosters, puffing out, itching for a fight, confident the other guy needs put in his place?

Of course this is almost always theoretical, played out in our minds, but why even there?
•  Maybe we’re taking up our position in the global war on terror.
•  Maybe we’re defending, or not cheating on, Jesus.
•  Maybe we hope Muslims will bow to Jesus before it’s too late.
•  Maybe we just like to be right and correct other people.

I don’t know why I get such a buzz from correcting others, so I’m not going to scold you for what’s going on in your psyche. But I am going to propose another possibility to try out in our heads and in real life.

Jesus is mentioned by name 25 times in the Quran! Muslims believe he is a messenger from God, that he performed miracles, and they’re comfortable with the title “Messiah” for him. They think he is presently alive and will someday return to Earth to defeat the anti-christ.

That a lot of common ground right there. Of course, some of those terms may have different meanings, and Muslims contend Jesus is alive not because he resurrected but rather because God spared him crucifixion and took him up to Heaven.

What a buffet of things to talk about, to build relationship over. What if, in the framework of friendship, we all looked afresh at who this Jesus is, what he did, and what he wants with the likes of us?